The week after Labor Day has become my favorite time to go cruising. School is back in session, crowds of tourists have all but returned home, but the weather-if you’re lucky-retains most of its summer warmth.

With a storm brewing to our west, blocking popular destinations like Block Island and Newport, Karen and I cruised east burning up some vacation time while discovering what else our new home state had to offer. From Clinton and Branford, to New Haven and Westbrook, we learned that Connecticut (a drive through or past state for many people) is filled with charming anchorages and cities on the rise.

I hope you enjoy some of the photos from our adventure, but more than that, I hope they inspire you find that new destination near you that might be hiding in plain sight. 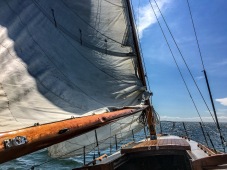 Kicking off a trip in style. 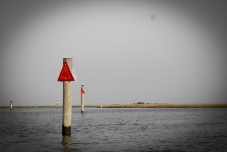 If you cruise down the coast, especially in the off season, you should seriously consider stopping in Clinton. And get the breakfast at the town marina!

Day one of my week without wearing shoes. Life is good. 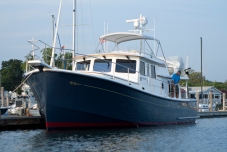 Summer, I miss you already.

The Thimble Islands: Small rocky islands near Branford,CT make you feel as if you’re cruising in Maine.

The hospitality at Brewer in Branford is world class.

The Lobster Shack: Far enough away from Brewers in Branford that you don’t feel guilty ordering a large lobster roll.

Me: That’s a good looking street name. Karen:That’ll be my name soon too. Me: [Long Pause] Huh, that’s true.

A few hours down the coast is New Haven, an often overlooked cruising destination.

New Haven is home to Yale University, a campus with some pretty stunning architecture.

Being a college town, there’s no shortage of popular bars.

Thinking deeply about things at Yale. Lunch. I was thinking about lunch.

35-knots winds had our boat bucking like a bronco all night. No sleep was had. 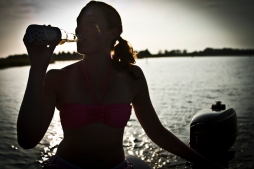 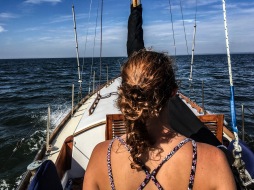 Cruising home is never as fun.

Just a short hop from our homeport, we found Westbrook (and the Brewer marina there) to be a gem hiding in plain sight. 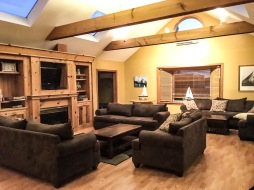 The clubhouse for guests of the marina is downright impressive. 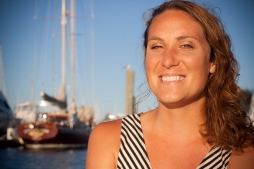 A dinghy ride to dinner on our final night. Does it getter than this?

Time. There never seems to be enough of it. Despite enjoying one of the most memorable summers of my adult life, what with my girlfriend Karen agreeing to marry me, the seesaw that is the work-life balance was tilting heavily in the hectic direction. An escape on the boat to unplug and recharge was calling my name. With the remnants of Hurricane Hermine kicking up seas to the east, we decided to spend the week after Labor Day cruising west and exploring the Connecticut coast.

During our first days cruising to Clinton and then on to Branford, I frequently felt the urge to pick up my iPhone, swipe left and check my work emails. Advice from my colleagues—John Wooldridge told me to “take it slow and enjoy every second,” and Jason Wood said, “Take a real break, chuck your phone in the drink on Day One and share your new number with us when you get back”—reverberated in my mind and allowed me to put the phone away.

And our week away from the real world provided everything we could hope for in a boating adventure. We enjoyed smooth sailing and squalls alike. There were nights when we slept peacefully beneath the stars and others when we cursed the boat while simmering in puddles of our own sweat. There was also a sleepless night in New Haven, where 2- to 3-foot seas on our mooring made for a night we’ll never forget. The seconds felt like hours waiting for the sun to come up. We enjoyed some great meals and a couple of terrible ones. We discovered destinations we want to return to and others we don’t.

With the end of our trip nearing, we had really found a groove. We were working well together and just enjoyed hanging out and being on the water.

That’s when I got news: My colleague at Power & Motoryacht, Richard Thiel, had suffered a major stroke. He wasn’t going to recover.

He spent a couple days in hospice, and early this morning he passed away.

It was a punch to the stomach. Richard was as active as they come; a cyclist and serious boater. My colleagues and I shared our shock and sadness, and Jason again provided sage advice: “If anything, this should be a lesson on how important enjoying your life outside of work is. Enjoy your boat and fiancée.”

Cruising home toward Essex this morning, the sun glinting off the ocean, my thoughts drifted to Richard. He was a legend in the marine industry whose time testing boats left a permanent—visible to all those who test boats for a living—wake on the ocean. Richard, always gracious with his time, followed my blog; it pangs my heart knowing this post will land in his inbox, never to be read.

Richard and I spoke frequently of sharing a meal at the Blue Oar, just up the Connecticut River. Alas, busy schedules and lifestyles prevented such a meal. In my last email to Richard, I suggested we get together for that long-anticipated breaking of bread (and beers). It would go unanswered.

After what I’m sure will be a long winter, I plan on visiting the Blue Oar when it (and the boating season) reopens. I will pour a pint for Richard. Instead of hearing tales from the “glory days” of marine publishing or soaking up knowledge from the longest-serving Editor-in-Chief in Power & Motoryacht history, I’ll sip a cold beer and be thankful to be a member of the brotherhood that is Power & Motoryacht. I’ll be thankful that I’m able to run in Richard’s wake. I’ll forever be thankful that, on every boat test from now until I hang up my notepad and decibel reader, Capt. Thiel is watching over me.

I’ll forever be thankful that I’m running in the wake of a giant.

Sometimes I think the whole world needs to step back, kick its shoes off and take a nap under a tree. #clarity

The local residents of Fishers Island, New York have an online reputation for keeping to themselves and treating tourists like flesh-eating vultures. So it came as a surprise when, just moments after tying our dinghy up to Pirates Cove Marina, a woman walking by turned to Karen and I and asked, “Do you two need a ride anywhere? I’m heading across town.” I guess, just maybe, not everything you read on the Internet is true [gasp!].

We declined the kind offer and set out to explore the island on foot. How’d she even know we were visitors? You have to let everyone know you’re a tourist, I told Karen as I adjusted my large Canon camera around my neck and the backpack on my back.

As we wandered the quiet, wooded streets we came across a number of locals who all greeted us not just with the obligatory mumble and head nod, but with actual smiles and articulate greetings.

Another misconception about Fishers Island is that the population is made up of blue-blazer and bow tie wearing seniors. And while that demographic is represented, the island offers much more diversity. We found this to be especially true when we stumbled onto a beach on the west side of the island where (at least) a hundred young people threw back red solo cups and tossed frisbees.

The rest of our day would be filled with requisite cocktails and an alfresco cookout. Afterwards we’d take the dinghy into the Fishers Island Yacht Club and set out in search of ice cream. One rule we’d made up that challenged this time-honored tradition was that we couldn’t use our phones to look at a map. We’d have to actually explore the town the old fashioned way.

The summer sun was setting, casting long shadows onto the quiet streets. The well-manicured landscapes and colorful homes with wrap-around porches gave you the feeling that you travelled back in time. Furthering that illusion was a gang of boys and girls tearing through town on their bikes. When was the last time you actually saw kids enjoying a bike ride with other kids? It was a welcome sight.

On a hunch, we followed their general direction until we were all reunited at Toppers ice cream shop, a pet-friendly hot spot in town where all the local kids hung out. If you were to take the phones from their hands, the scene would look like something from a 60’s movie.

We’d spend the rest of the weekend kicking back on the beach, exploring the island’s other harbors and generally enjoying some R&R.

A swift, Sunday sail later and we were back in Essex and preparing for the week ahead back in the real world. It’s funny,  I’ve probably passed Fishers Island from the water dozens of times, and because it didn’t have one of those popular destination names like Cuttyhunk, Shelter Island, or Block Island, I—and I suspect many boaters—never paid it much attention. It really is a gem hiding in plain sight.

So, if you’re looking to escape the world for a little while and slow things down on an island with small town charm to spare, a weekend on Fisher’s Island can be as refreshing as a cone of mint chip ice cream on a hot summer evening. 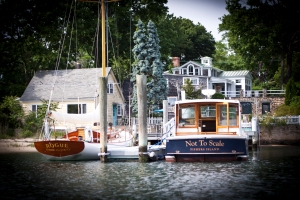 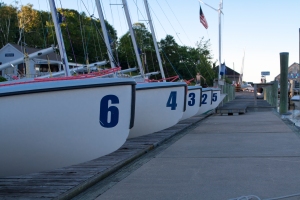 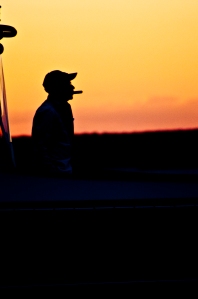 Boating is, in many ways, a suitable metaphor for life. In both, there are times when the sun’s shinning and you’re cruising in calm conditions that you think’ll never end. Then there are times when—out of nowhere—the wind picks up and you’re braced, white-knuckled at the helm, fighting mightily in vain to get your bearings. In the end you hope the good days out number the bad, or at least break even. And along the way you’ll come across characters of all types and sorts. If you’re blessed, like I’ve been, the people that mean the most, your family, will stay aboard with you for as long as they can. Friends and colleagues, well, they’ll come and go.

You’ll spend some time in stunning destinations, making connections that’ll shape you in ways you never expected, and you’ll also find yourself in spots so miserable you’ll find yourself praying for the tide to change so you can leave it in your wake.

There will be times where the boat purrs like a kitten and the brightwork glistens into the eye of all those who pass it. Beautiful! Some will proclaim at the sight of her. There is always a lot of praise when you’re up on top. Then there are times where things are breaking left and right; leaks spring up from everywhere, the floorboards get rotted. You pull up the carpet and put away the fluffy pillows. Tools and drops of sweat are scatted everywhere. Frustration is high, and there’s not a soul around to help.

But you stay focused, work hard, and with a little luck smooth sailing finds you once again.

In life, as in boating, it’s important to find a partner, a first-mate of sorts that will stand by you not just in the good times, but in the bad. After all, what’s the point of embarking on an epic adventure if you have no one there to share it with?

Over the last four years, Karen has proven to be such a partner. From convincing me to buy the boat, to spending hundreds of hours sanding, packing, painting, priming and pumping out endless moral support, without her, none of this sailing adventure would be possible. I’m excited to announce that last weekend, on a picturesque afternoon in Hamburg Cove, Karen agreed to marry me and stay on this adventure for the long haul.

I feel like the luckiest guy alive and I’m extremely grateful to be on this adventure with her. 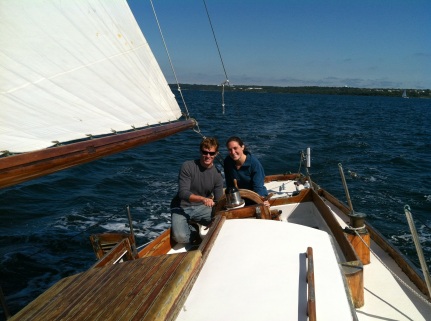 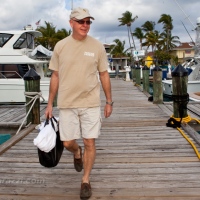 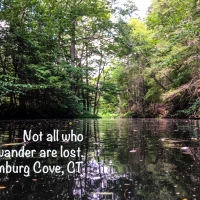 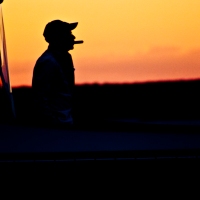 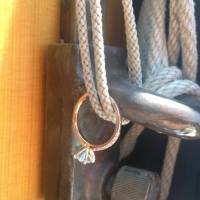 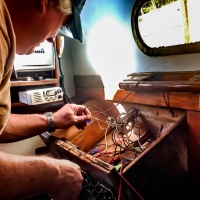 A SAILING STORY
Blog at WordPress.com.