A constant desire to be out on the water is something of an occupational hazard I face working as a marine journalist, which in a way makes sense. Day after day stories of turquoise water, wide-open diesel engines and adventure pass across my desk. This sparked what would become two serious past times, daydreaming and browsing on Craigslist for my first boat.

I’m not stranger to boating, much of my life has been spent cruising aboard my parent’s 33-foot Egg Harbor. Summer vacations from our homeport on Long Island to northern destinations like Maine and Montreal and southern destinations like the Bahamas instilled in me a love for the sport. It’s no surprise that I would one day want to own a boat of my own, the shock would come in the type of boat I was pursuing. I wanted a…sailboat (gasp). Living in the sailing capital of the world, Newport, RI, and watching beautiful boats silently and gracefully glide across the picturesque harbor by harnessing the wind fascinated me. Jumping at a handful of chances to ride along these, to me, mythical creatures and I was hooked.

I would spend months scouring Craigslist.  Not to toot my own horn, but over the last few months, I had gotten pretty darn good at navigating that site. I mean, I knew all the tricks. No picture? Not for me. I would scan the price, name and models, selecting only those that fit my initial criteria. If I did click on the link, I would be able to separate the serious sellers from the scam artists within seconds.

Once in a while a chosen few made it to my next round, where I would request more images and information, which is where most of my searches would ultimately end, until the other day. While doing some evening scanning, I came across two sailboats that made me do a double take. One was a 25-foot Catalina that was the right price and came with all the toys. The second was a 32-foot Rhodes. A bit outside my price range, she didn’t come with any of the bells and whistles and needed serious cosmetic work, but her sleek lines were speaking to me, asking to take a closer look. I arranged to view both boats that weekend with my girlfriend, Karen, who would keep me from making any rash decisions, or so I hoped.

Our first stop was the Catalina 25. The owner would not be there but the tender launch service at his marina would take us out to her and we could look around from there. Standing proudly across the flat calm harbor, she was pretty from afar. I thought she could be “the one.” As the tender pulled up along side her, my heart sank. The entire boat, from bow to outboard was absolutely covered in seagull excrement.

“I’ve got to pick up some other people, did you want to look around or do you want me to just take you back?” asked the tender launch operator.

I had come too far not to at least go aboard. I (literally) dragged Karen aboard too.

“You have to look past the crap,” I pleaded, as I opened the cabinets with my foot. We ventured below into the cabin, where the smell of mildew hit me like a stiff jab. Karen’s face showed that she was less than thrilled. 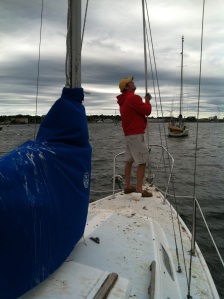 “You have to smell past the smell,” I begged, while breathing through my mouth. We quickly wrapped up our tour and flagged down the tender.

We drove in silence to our next viewing. We met with the owner of the Rhodes 32 who took us aboard his fishing boat, and around the corner to where she was moored.

Love at first sight may sound a bit cheesy, but when I saw the light beige hull and the tall wooden mast glistening off the water, my pulse quickened significantly.

I hopped aboard the boat, walked past the wooden ships wheel and took a lap around the (excrement free) topsides. While it was obvious that a coat of paint and some serious TLC on the brightwork was needed, I saw her potential immediately. A lap around the interior revealed that while some finishing touches were necessary, she certainly had character to spare.

I opened up her hood and saw a pristine 2004 30-hp Yanmar diesel. A young heart pounding inside a classic, it seemed we had much in common.

With the best poker face I could muster, which I imagine still showed an obvious smirk, we began talking price. When the owner threw out a bottom line below what I was expecting, I responded with three little words; the words that have both defined and haunted boaters for centuries.