A few days after verbally agreeing to hire Jim Titus to build a wooden mast for me, it was time to as they say, put my money where my mouth is. I had to pay Jim for the wood needed for the construction. I assumed this process would include a trip to our local Home Depot and a pair of flat carts.

“We’ll want to go will some nice Sitka Spruce from up in Maine,” explained Jim. He would take a long pause, long enough for me to visual in horror the road trip with my new friend in his aging work van to Maine. “There is a place outside Boston that should have some.”

Ohh thank god. It wasn’t down the block but it wasn’t across the country either.

He told me he would pick it up in another week or two and I could just pay him for it later. This struck me as unorthodox coming from a business owner but I agreed.

In the meantime, Jim instructed me to cut my old mast in half so we could throw it in his truck and bring it to the shop, there it would serve as an on-scene template.

Eager to get the process started, I borrowed a sawzall and buzzed down to where my mast lay broken. I ran a few extension cords and found the center of the mast and prepared to rip into it.

Now at this point there has been multiple occasions since buying the boat where I second-guessed myself but this one was stays vivid in my mind. Once in two pieces no amount of opoxy, clamps and hope would rebuild my water logged mast.

After a few deep breathes and a lot of mumbling to myself (which surely concerned the marinas employees who looked on) I took a leap of faith and dug the blade into the heart of a mast that was more than half a century old. I wish I could say I felt relieved when after the mast was cut, like I finally had commited to building a new one, not the case.

A few days would pass before the mast was brought over the Mount Hope and even longer before a fresh pile of 20-foot long Sitka Spruce planks would arrive (the cost of the wood was $700). The broken mast lying next to pile of planks were in sharp contrast to each other. The past and present, a long winter and myriad of lessons lay before me. Looking at the two, I had more questions than I had answers. The only thing I did know, was there was no turning back now. 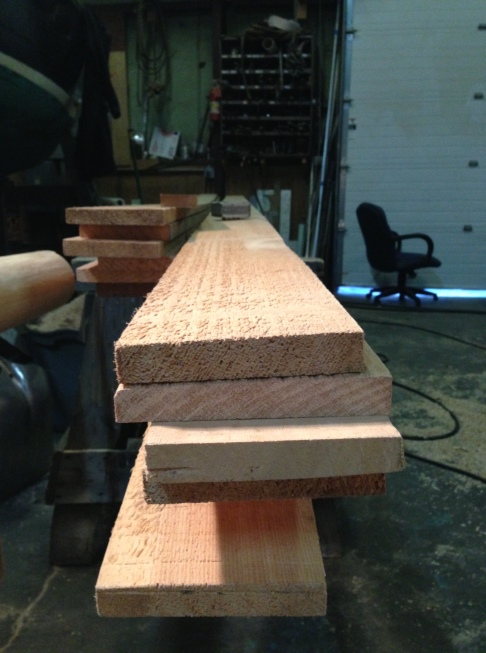