Driving over the Pell Bridge between Newport and Jamestown , I couldn’t help but notice more and more boats out on the water. The sailboats gliding across the bay were so close yet so far away. Though it was impossible to see, I imagined the sailors had smiles as full as their sails, laughing at the commuters above them. I was jealous but I know (/hope) I will be joining them soon and tonight was a big step. I showed up to the shop after work to give my mast one last sanding with 300 grit paper and hopefully apply the first coat of varnish. After a light final sanding, Jim inspected it.

“I’m happy with it. I think it’s ready for varnish,” I said, more asking than telling.

“Knock yourself out,” said Jim who reminded me to shut off the lights when I was done.

Armed with a foam bursh, some paint thinner and a quart of Epifanes high gloss clear varnish, I took to it. Cracking the fresh can of varnish after nearly seven months of working on the mast was a great feeling. It smelled like victory. 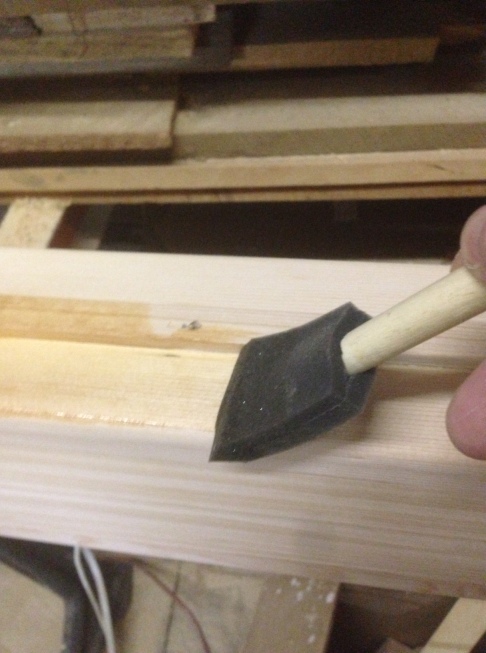 Carefully mixing eight ounces of thinner with eight ounces of varnish, I stirred up my first batch. The 1:1 ratio is used for the first two coats to seal the wood. Later rounds of varnish will be done with a ratio closer to seven parts varnish one part thinner and will be done with a badger hair bursh and will require almost an artists patience and smooth hand to ensure a high-shine finish. The only one in the shop that night, I took the liberty of blasting some of my favorite country songs from my phone and started coating the mast. The work was easy, and dare I even say, fun. Seeing an immediate change, is not something I’ve been accustomed to with this project so watching the bare wood take on a shine, as slight as it may be, was a rewarding experience. Then entire mast took less than an hour to coat.

I was so excited to be varnishing and to have the run of the shop that despite the fact that 9 o’clock was pressing upon me, I decided to hit my favorite bench grinder to clean up my winch handle, which would complete the set of winches I had in a box of hardware.

Tonight was a small victory but I have learned, when it comes to boat restoration, you need to celebrate those too.