As a younger lad, if I wasn’t sprinting down the dock with my bicycle or Razor scooter, I was usually circling it aboard my parent’s dinghy with a classic (read: loud and slow) 4-hp Evinrude outboard like a pestering green fly. Or I may have been found at the end of the dock casting for snappers, and more often than not hooking our neighbor’s boat instead.

Yes, life on the dock at Wantagh Park marina where my parents kept their boat, was good. No matter how many times my brother and I came tearing through a dockside-cocktail party, (read: every weekend) the group of boaters we shared the dock with always treated us well. Whether it was sharing a tootsie-roll pop, or a can of soda, or throwing a ball for a few hours while I learned to swing a bat, that group of people became something of a dysfunctional family to me.

Alas, adulthood and responsibilities find us all one day and I don’t get to visit the old dock as much as I’d like to. When I do manage a visit, it’s always a treat. No longer running with a Huffy bike under one arm and a super soaker under the other, I now get to stop and share a laugh with everyone and it feels as if nothing has changed.

It came as a shock to learn that a long-time friend from the dock named Debbie Rupert lost her battle with cancer recently. She was one of those people who were constantly there when I was growing up, offering a friendly smile along with an ice-cold can of Coke. She was simply a genuine and caring person. I, along with everyone who knew her, will miss her.

Debbie (at the far left) was everything you could hope for in a friend and neighbor.

I don’t know what it is about boating that attracts some of the best people. Perhaps it’s the extra vitamin D or libations we consume. Or maybe it’s the fact that we understand having a conversation in the cockpit of a boat is infinitely more meaningful than a weekend spent in front of a television. Whatever the reason, I am sure glad that I spent much of my childhood on the dock and that I can count people like Debbie Rupert as a friend.

6 thoughts on “Remembering a Friend” 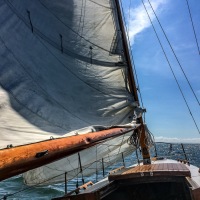