Narragansett Bay was exploding with activity. The sound of blaring horns and the Star Spangled Banner provided the soundtrack to which hundreds of boats of all shapes and sizes crisscrossed one another at high speeds. I’ve seen this level of nautical pandemonium before but it’s typically reserved for the fourth of July.

The day’s pomp and circumstance was caused by the departure of the Volvo Ocean Race—a grueling around the world sailing race—from Newport. Watching all these boats, many of which were launched early for the sole purpose of seeing these sailors off assuaged any doubt as to whom the title sailing capital of America truly belonged to. 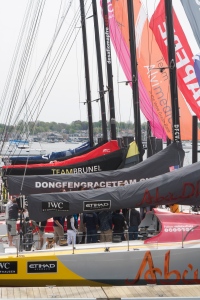 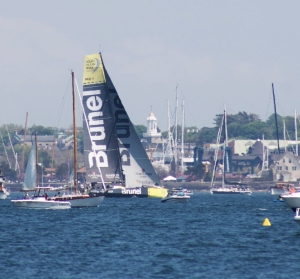 It took steely determination to not crack a cold one, sit on the dock and watch the VOR boats cut and jibe through the crowd. But just a day out from launching, Karen and I were forced to return to the ever-growing to-do list. From loading provisions, prepping the dingy, attaching the mail sail and tending to lingering brightwork, our plate was full.

And let me tell you, chores like sanding a toe rail (again!) or fumbling with the tiny clasps that attach the sail to the mast never seem as monotonous as when hundreds of people are out having a blast just yards away. I felt like that kid who has to sit in the library and study while all his friends are out on the town.

A few cold glares from Karen would shake me from my daydreams and send me back to the tasks at hand. Together we cleaned, prepped, organized and got the Karen Marie ready for to launch. By the time all the work was done the harbor had become quiet once more. The boat traffic transformed into a parade of cars fleeing from Newport.

Before joining the procession, we stopped at Spinnakers in Jamestown for a couple scoops of ice cream. Nursing a cool cup of mint chip, I realized that despite an incredible difference in skill and craft, Karen and I weren’t so different than those Volvo Ocean Race sailors. We both came to Newport from a distant land, and had no idea what to expect. We were treated to world-class hospitality and in the end, leaving Newport for another adventure is bittersweet.

Next weekend, as the Karen Marie heads passed Castle Hill there won’t be hundreds of boats to see us off, no horns will blare and the Star Spangled Banner will be coming from my iPod instead of Fort Adams. But one thing is certain; for us it will be no less special.

One thought on “Special Send-Off”